Productive Fishing Is Up To All Of Us

Alaska is unique. Unlike much of the rest of the country, we still enjoy incredible fishing and wild landscapes where we can fill our lungs with fresh air, our freezers with healthy protein, and our ears with nothing but the sounds of a river and the people we brought with us. That exists here because we have intact upstream habitat and careful management for Alaska fish conservation. We have complete river systems that operate today in the same way—or very close to it—as they have for generations. When we compare the number of fish in Alaska and the landscapes upon which we chase them to those of our neighbors to the south, the comparison is staggering. We don’t have the concrete, the dams or the highways they do, and it shows in the quality of the fishing. We are the envy of the fishing world.

However, we’ve come to a point where the pressure on our resources is mounting, and the reasons are many and varied. It’s our time to decide what we want Alaska’s fishing future to look like.

Mines, roads, and dams are all important in developing our society, but they have to be looked at both from the perspective of their impact as well as their contributions. They have to be considered as pieces within a larger puzzle, not individually. We have to ask what we are willing to trade in pursuit of these developments and what we’ll have when lots of individual projects start merging together.

In a world where we’re painted into ideological corners, often by interests who need political clout to get what they want, we too often overlook a simple fact: Alaska fish conservation doesn’t have to be political. It doesn’t exist to say “no” all the time and it isn’t an ideal built on the backs of zealots who stand in front of bulldozers or climb trees to keep them from being razed.

Conservation is an ideal built on a simple foundation: What we have today is due to the grace of those who came before us, and what our children will have tomorrow depends on the foresight we exercise today. Nobody wants to be among the generation that allowed entire runs of salmon and trout to be put at risk because we didn’t take the time to make phone calls, write letters, or send emails to stand up for them. I know I don’t, but I’m going to let you in on a little secret. Decision makers don’t want to hear what people who get paid to protect fish think—they want to hear from you!

So, in the name of wild rivers, healthy fisheries and access to public lands, my job is to ask fishermen and women of Alaska’s freshwaters to do decidedly un-fun things.

I ask them to sign petitions, write letters or call their elected officials. I ask fishermen to get dirty and sweaty moving dirt and rocks to repair stream banks, or to read scientific articles or go outside their comfort zones and attend a hearing with a bunch of boring, suit-wearing people talking about things that may seem only tangentially related to what fishermen love and value.

I don’t do this because I love legislative hearings or feel I get better at fishing after having read an article on stream erosion. I don’t send emails because I think anyone needs more emails or even because I want to write them.

On behalf of the organization for which I work, Trout Unlimited, I do all this for two main reasons. First, I do it because I figure we as anglers have a few profound things in common.

We love rivers. We love the zing of a fish on the end of the line. We love the inevitable smile that comes with that sound. We love the intensity of battling a fish, the joy we feel when we’ve succeeded, and we even take pleasure in the memories of the trophies that got away. We love the peace and solitude of a river as much as we value the idea of sharing all this with the people we hold most dear.

I think that is powerful but remember, it’s about what you think.

Art Neumann, one of the founders of Trout Unlimited once said, “If you take care of the fish, the fishing takes care of itself.”

Whether you see yourselves through this lens or not, it seems to me that anglers are all inherently conservationists. In fact, if you’ve ever lied about where you caught fish or the lure you used, you are practicing a form of Alaska fish conservation. If we want to keep going back to our favorite rivers or make it to that bucket-list destination, we have to pitch in and be vigilant to make sure those places not only remain on the map, but that the factors making them productive stay that way.

The second reason I do what I do—asking anglers to be involved—is because it works. Over the years, I’ve witnessed the power that lies in many singular voices speaking up in whatever way they can for places they care about. And these many singular voices may disagree on a lot of other topics—that’s not unusual in today’s polarized political landscape. But anglers—at least those worth their salt—can be counted on to make the connection between intact habitat and great fishing. One isn’t possible for very long without the other. For most of us, the idea of conserving massive landscapes seems overwhelming. It might even seem like a job for someone else. Maybe someone like me. And yet, all around us, the places that we hold most dear as anglers are threatened or already gone. Trout Unlimited can’t do this alone. We need you.

I’m here to encourage fishermen and women to take on just a few of the many smaller actions needed to make big things happen. Make that phone call. Send an email. Maybe even attend that meeting. These tasks have impacts well beyond their weight. I know. I’ve seen it work when many hands make short work of seemingly monumental tasks.

The task of conserving currently productive river systems is a much better proposition than the costly prospect of trying to bring back a river system we’ve trashed, which is a position many in the Lower 48 find themselves. It’s not liberal or conservative to want to keep Alaska’s fishing from being like the fishing everywhere else. It’s common sense.

Throughout this year, the staff of Trout Unlimited’s Alaska office will be writing in Fish Alaska about the special places or the fish we’ve come to know and love, and what we’re doing to make sure they’ll be around in the future. We’re going to write about efforts to protect Alaska’s fisheries so our children may have the chance to use and experience them the way we do (or, maybe even better than we do).

Accomplishing this requires staying informed, asking how these decisions fit into the larger puzzle, and then taking a stand. Together, I think we can do a lot of good for Alaska fish conservation in that way.

Thanks in advance for reading, and for forgiving my persistence in calling for taking care of what we have up here. Once we’ve all sent the letter, made that phone call or attended that meeting, I’ll see you out on the river. 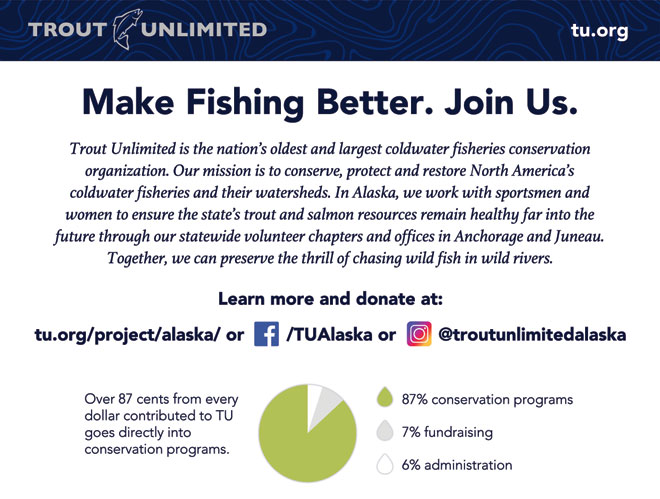 Jenny Weis is the Alaska communications director for Trout Unlimited. She lives in Anchorage.[/vc_column_text][/vc_column][/vc_row]