Life of a Sockeye A few days later, I left town to guide a natural history brown-bear film shoot in Southeast Alaska. One of the sequences we were trying to get was of a bear chasing salmon underwater. We had a camera in an underwater housing submerged near the base of a raging waterfall. It could be operated from 100 yards away with an iPad. On its screen, I watched dozens of pink salmon and small, darting, feasting Dolly Varden. In the middle of the frenzy was a salmon with a crimson body and green head—a male sockeye. It was swimming in place beneath the falls, waiting for the right moment to attempt climbing them so it could spawn in the small lake above. Bristol Bay has the largest sockeye run, not to mention the biggest wild salmon fishery, in the world. But in southeast Alaska, especially where I was guiding on Chichagof Island, sockeye are far and few between. 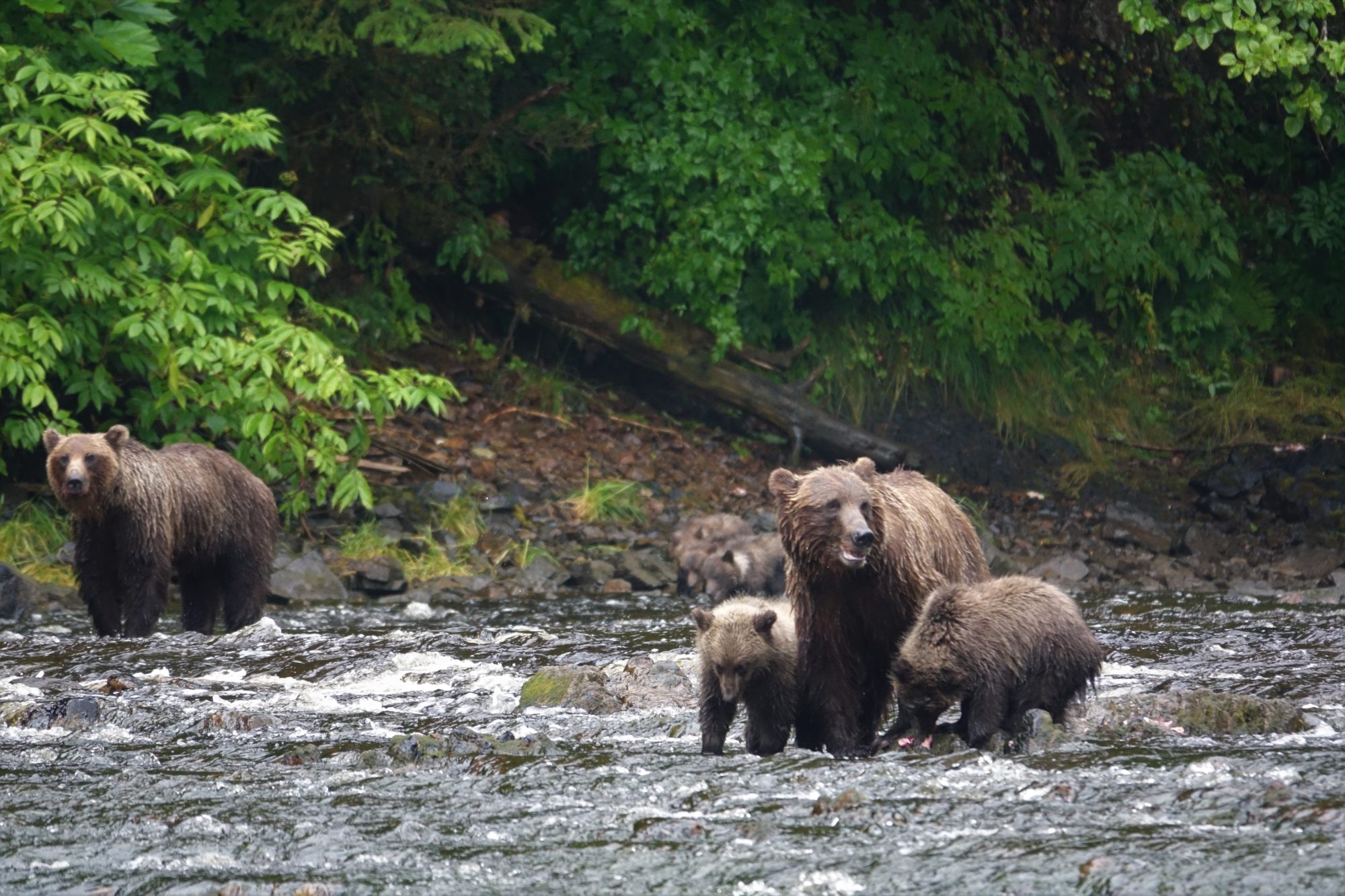 I’ve guided a handful of other bear film projects on salmon streams. Some, like this one, had me in the field for a month. The main camera operator on this shoot paid homage to a spawned-out salmon by gently stroking its slimy flesh as it twitched in its final moments. A short while later, a young bear tore it apart and feasted on it. Rain fell heavy and often. I spent many hours alone operating the underwater camera. Bears walked by, sometimes a few yards away. Most would investigate the camera once and, seeing it was not a fish, leave it alone. A few would move the camera around. Once, when the camera was malfunctioning, a bear shook it, and it began to work again. A day passed since I first saw the lone sockeye; then another. The crimson salmon remained in almost the exact same place below the falls. I spent a lot of time being still, surrounded by salmon in various phases of spawning, death and decomposition. The lifecycle of the sockeye salmon I spent hours watching was very similar to that of sockeye in Bristol Bay. It was born in the lake above the waterfall four or five years before. Of the five species of Pacific salmon native to North America—pink, chum, sockeye, coho and Chinook—sockeye are the most dependent upon lakes for spawning and rearing habitat. This makes the incredible river, lake and tundra habitat of Bristol Bay a paradise for sockeye. On the other hand, southeast Alaska’s topography is generally steep, with short creek systems that are more ideal for pink and chum salmon.

The Chichagof sockeye’s mother had used her tail to dig out one or more redds (an underwater nest) in the gravel, then laid between 2,000 and 5,000 eggs. Simultaneously, the sockeye’s father had sprayed sperm from his milt sacs onto the mother’s eggs. The eggs had an adhesive texture and stuck to the gravel and each other. Afterward, the mother closed her nest by covering it with gravel. The father moved on and tried to fertilize other females’ eggs while the mother guarded her redds. Both were dead a week or so later—a fate all spawning salmon share.

During the winter, the juvenile sockeye and its brothers and sisters hatched. Called “alevins,” each possessed a yolk sac that sustained them until they emerged from the gravel in April or May. Now considered “fry,” the sockeye spent one to three years living in the lake, feeding on zooplankton and insects. There, it escaped death numerous times from a host of predators. One spring, the sockeye left freshwater and entered the ocean. Now a “smolt,” weighing a couple ounces, it used the Earth’s magnetic field to guide it. It fed on plankton and small crustaceans—sockeye’s flesh is an orangish-red color as a result of their diet—and gained 99% of its 8-pound adult body weight. After one to three years of ocean life, using its incredible sense of smell, the sockeye began navigating back to its natal spawning grounds. Not all salmon return to their rearing grounds. A small percentage stray and colonize new watersheds, which is an ecologically vital component to colonize and recolonize watersheds that have been extirpated of salmon.

Estimates vary, but for every sockeye born, one out of a thousand survives to make it home to spawn. I recognized around 10 different bears regularly utilizing the creek on Chichagof Island. Others would come out of the woods to fish during the night. One study on Kodiak Island stated that an adult male brown bear ate 50,000 calories of salmon a day. An average sockeye contains around 4,500 calories. I watched one bear catch and consume five salmon in 20 minutes.

It may be abnormal to get attached to an individual salmon, but I found myself rooting for that one sockeye. I wondered what it was waiting for. Its odds of surviving to spawn decreased each moment it hung around. Bears would leap into the hole the sockeye was waiting in and come out of the froth of whitewater with a fish in their jaws. Each time it was a pink salmon. After a bear moved on, the sockeye would return to its place beneath the falls. Then, after three days of watching the sockeye, the next morning it was gone. It made me think about the millions of sockeye returning to Bristol Bay and how, even though Bristol Bay’s run is one of the greatest natural wonders of the world, it only took one sockeye to remind me of how lucky I am to live in a world with wild salmon. Other salmon thrashed the water and prepared to leap the falls. Bears preyed upon them. Ravens, eagles and seagulls scavenged guts and tattered carcasses. Somewhere, in the lake above, I hoped the sockeye had found a female member of its species and was preparing to spawn.